Can you imagine the string of nightmares you’d stir up if you wanted the sewer pipe in front of your house repaired and you had to call the Federal Sewer Pipe Repair Department in Washington, D.C., to make an appointment? – Kevin Kelly

Thomas Lee, Rachel Bussin, and I got into the research of urban villages a while back. Something that really drew me to this topic was the phenomenon of small communities. No, not this kind of phenomenon, but a clearly explainable set of conditions present in many small towns, that are transcended into bigger context of a city with a retained charm of closely knit community. I almost forgot about the research my colleagues and I have done last autumn, when I happened onto this post by the oh-so-inspirational Carl Hastrich. Although, reading it is an absolute must to proceed with this post, here is an excerpt from Kevin Kelly’s “Out of Control” book, that really drew my attention:

Looks like, the equivalent to this method in Life’s Principles belongs in the Integrate development with growth strategy, more specifically build from the bottom-up. 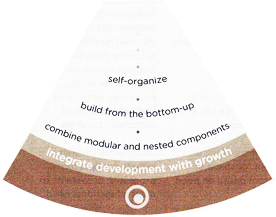 A great example of such planning was given by Sherry Ritter during one of her presentations. The paper wasp queen is responsible for reproducing and setting up the initial nest. The queen paper wasp will start building a nest by attaching a central strand to the sheltered structure. The rest of the comb is built off of this central strand. Once the queen has built several cells, she will begin to lay eggs in the bottom of each cell. These eggs will develop into either male or female larvae. Once the larvae are old enough they will build tops to close off the cell. There they will remain until they become pupae. The workers are responsible for expanding the nest and feeding the larvae.

When Thomas, Rachel, and I were setting a plan of attack, our main strategy was going to the very roots of what the community was about, starting with the very essentials of it hundreds of thousands years ago. We looked at the development of community throughout history to understand the major factors that make it successful. And, of course, what kind of designers would we be if we didn’t put it into a visual diagram?

Diagram of community development through historic periods. Inspired by Greg McInerny and Stefanie Posavec visual representation of The Origin of Species by Charles Darwin (I swear, purely coincidental subject matter!)

Well, so if we apply the methodology of Kevin Kelly to this diagram, we have to redraw it completely! Instead of one node birthing fairly homogeneous branches – if we equate it to city planning, The Federal Sewer Pipe Repair Department will be in black – we would take the very core of community, when tribes populated the Earth, and draw a new layer over it keeping the very principle of an underlying simplicity. Sounds great!
However, there is something in this sequence that is a bit vague.
END_OF_DOCUMENT_TOKEN_TO_BE_REPLACED

Error: Twitter did not respond. Please wait a few minutes and refresh this page.